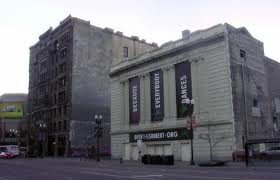 The Shubert Theatre of Minneapolis

The Sam S. Shubert Theatre opened in Minneapolis in 1910. An historical landmark and the oldest legitimate theater in Minneapolis, it has had many incarnations and monikers: as the Shubert, a broadway style performing theater; the Alvin, a vaudville/burlesque theater; the Minneapolis Evangelistic Auditorium; and the Academy, a cinema house. In 1999 the Shubert was uprooted and relocated to Hennepin Avenue, and is now in the Guiness Book of World Records as the most massive building ever moved on rubber-wheeled dollies. Now called the Goodale Theater, it is currently under renovation and is part of a new, three-building complex, including the Historic Hennepin Center for the Arts. The complex, which includes an atrium, has been dubbed the Cowles Center for Dance and the Performing Arts. It is slated to open on September 9, 2011. Produced by Dixie Treichel.